In Riley v. California, the Supreme Court found unanimously that when a person is arrested a cellphone may not be searched without a warrant.  In response, officers nationwide (Los Angeles to New York, and even in Houston) officials met to discuss Wednesday’s unanimous ruling that prohibits law enforcement from searching an arrestee’s cellphone without a warrant unless a person’s safety or life may be in danger.

In Houston, we are surprisingly ahead of the curve.  Prosecutors treat cellphones as personal property with privacy rights (in most courts) and officers are told not to 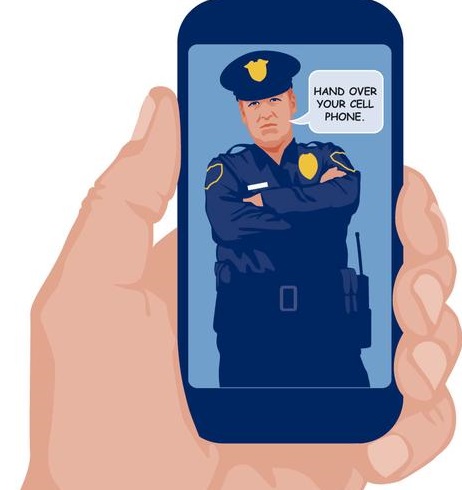 search phones without permission, or a search warrant.

A little background, Riley was stopped by police for driving expired number tags. The officer subsequently found that Riley also had a suspended driver’s license. After impounding the car, guns were found hidden under the car’s hood. When cops searched the cell phone, they found a connection between Riley and a street gang and photographs of Riley standing in front of a car that was involved in a shooting a few weeks earlier. Riley was convicted of attempted murder and sentenced with a 15 years to life sentence.

Wurie was picked up in a routine surveillance where the arresting officer thought that a drug sale was taking place. Wurie had two cell phones that were searched and this led to a location and photos. The search of the location, an apartment, yielded crack cocaine, weapons and drug paraphernalia. Wurie was convicted of distributing drugs. The search of the apartment was covered by an appropriate warrant. Wurie got 262 months in prison but appealed that the information improperly taken from his cell phones should have been suppressed.

Some argue that there are a host of problems embedded in the decision, including the danger to society of releasing criminals from jail.  The Court did not say that cellphones cannot be searched. What the Court said is that you need a warrant, in most (but not all) cases before a phone can be searched.  The argument goes further that for certain categories of crime, murder, terrorism, kidnapping, rape –the Court needs to revisit its decision. When serious threats are involved, law enforcement should not have to wait for a warrant.

True – Justice Alito warns against “using the blunt instrument of the Fourth Amendment” in deciding these matters and points out that the Supreme Court “is poorly positioned to understand and evaluate” these matters -BUT warrantless searches are only upheld for exigent circumstances in most instances, otherwise they can be used as a method of oppression.
The truth is that the Supreme Court’s decision in these cases leads to greater protection of our privacy rights.  It is a proud day to be part of the criminal justice system – proud day to be an attorney!

Have the police searched your person or belongings without and you were arrested?

Did the police search you without a warrant?

If you’ve been accused of any offense following a search warrant or a warrantless search, contact attorney Tristan LeGrande IMMEDIATELY by calling 281-684-3500.