Hate to break it to everyone getting their hopes up with the recent movement on marijuana regulation nationwide, but despite Colorado and Washington making marijuana use legal for recreational use and public opinion polls showing public support for legalization in Texas, it will be a long time before we see recreational use made legal in the lone star state.

First, in January 2015, there will most likely be 19 or 20 Republican senators, 92 to 98 Republican representatives, and a Republican governor. Mostly due to the gerrymandering of the districts in Texas, even if the GOP experiences a few bad years at the polls, the number of Republican representatives and senators in Texas is very unlikely to drop below 80 and 17 respectively between now and 2022. Also, it is likely  Republican Greg Abbott will be the governor between 2015 and 2019 – Republicans will probably dominate the governors office until at least 2023.

Second, unlike Colorado and Washington, the Texas Constitution does not provide for citizen initiatives. So it’s impossible for Texas marijuana legalization supporters to follow the model of their counterparts in those two states, where advocates gathered signatures to place the legalization reform on the ballot, and the state’s citizens determined the fate of the reform.

What this means is that a marijuana legalization bill, like any other proposed new statute, must be approved by the Texas House of 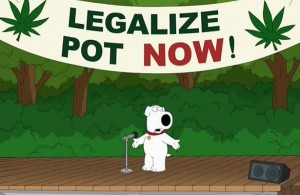 Third, most Texas state House and Senate districts, are effectively determined in the party primary in the spring, not in the general election in the fall — at least for the time being. Republican legislators are more concerned about losing the primary than losing the general election. Voting to legalize marijuana would cost them far more votes in the Republican primary than it would gain them. Hence, they choose to oppose any marijuana legalization reform bill.

Last, no one expects Democrats to win the Texas Legislature between now and 2022 (even after that is doubtful). EVEN IF democrats start to win seats in swing districts, they will be reluctant to support this legislation out of the fear that it will reduce their prospects of victory in the November general election.

A more realistic and attainable goal would be to have medicinal marijuana approved in Texas.  The battle to get this done has been lost up to this point, but for supporters of reform it is a necessary first step.