Home » General Blawgins' » Humble man too drunk to hold head up for mugshot – this is news!?

Humble man too drunk to hold head up for mugshot – this is news!?

Sean Carl Payne of Humble was arrested outside a bar in Humble early Thursday had so much to drink, police had to hold his head up to snap his mug shot.  Mr.  Payne was charged with public intoxication.  I found this story on CNN, a national news story about someone that was shit faced.  Why is this news?

I guess this just drew attention because the mugshot is kind of humorous.  Are we happy that we jail people for public intoxication?  Houston 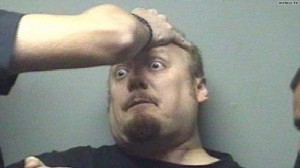 actually has begun a new program called the “Houston Sobering Center.”  Instead of being taken to jail for public intoxication, those picked up by police for being hammered out in public they can spend the night at the center rather than being hauled off to jail, overflowing our already crowded jails and tying up the courts.

The center has recently seen an uptick in visitors, meaning more Houston police officers are giving those stopped for public intoxication a chance to dry out for a few hours at the sobriety center instead of hauling them off to jail. It frees police up from filling out paperwork to get back to patrolling the streets.

Since this has been a successful program that eases the overcrowding problem at our jails, is more humane, and leaves the police on the streets to arrest real criminals, why are these programs not being used more widely?

Arrested for a DWI?