General in the Aryan Brotherhood admits to racketeering

A probe that led to warrants and prosecutions of 74 members and associates  of the Aryan Brotherhood of Texas also snagged one of its generals, a man know as “Big Terry” Blake.  Blake plead guilty Friday to a massive racketeering conspiracy.

Blake, 57, told U.S. District Judge Sim Lake that he’d been close to the gang for most of his adult life, and was made a “full brother” in 1991. 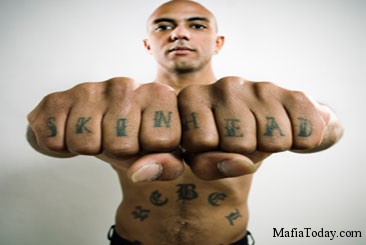 The Aryan Bortherhood Gang was born in the prison system of Texas in the 1980’s and still has a stronghold in prisons statewide today.

The race-based syndicate has a reach that extends from penitentiaries into the streets. Members have been imprisoned for crimes including arson, drug dealing, kidnapping, murder and an incident in which a finger was sliced from a corpse south of San Antonio as a trophy, according to court papers and testimony.

Its good to see that the US Attorneys office is spending some of its time going after violent criminal organizations.  These organizations take advantage in large part of the weaknesses in our justice system, particularly the illicit drug market.  BY keeping drugs illegal we create a black market for these organizations to use to generate revenue, fueling their other more violent crimes.