Robbie Knievel, the youngest son of the late daredevil Evel Knievel, was charged with felony drunken driving and criminal endangerment after allegedly causing a multi-vehicle collision in Butte Montana on Tuesday night.

According to Butte police, Knievel was driving a 2005 GMC Yukon at a high speed heading south on Harrison Avenue. Witnesses told police he rear-ended a Honda Accord, it hit a Ford Taurus and the Ford struck a Hummer. 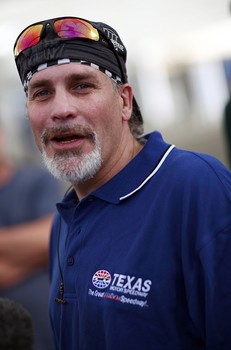 Knievel fled the scene in the GMC and it was located shortly afterwards parked on Sanders Street two blocks away. Police then saw Knievel walking on Busch Street, a block from the accident scene, and stopped him.

He had a bloody lip and police smelled alcohol on his breath. He admitted he had been driving, police said.

He refused to take a Breathalyzer and could not take some of the field-sobriety tests because of his bloody lip, police said, so they got a search warrant and had a blood sample taken at St. James Healthcare.

Police said his address is in Sequim, Washington, but the GMC he was driving Tuesday night was registered to a Butte man. When the judge asked Knievel to state his address, he paused for several seconds and said it was on his driver’s license.

Knievel, 52, caught a pretty good break considering the multiple DWI convictions: in lieu of bond being set, he agreed to either come to the jail each morning and evening and submit to alcohol screening or wear a bracelet that detects alcohol.

This DWI is a felony because Knievel has three previous convictions. The additional charge of felony criminal endangerment charge stems from Knievel allegedly running a red light and causing an accident that created substantial risk of death or serious bodily injury to another.

None of those others involved in the wreck appeared to suffer injuries.

Knievel also caught 3 misdemeanor cases: (1)leaving the scene of an accident, (2) operating a motor vehicle without an interlock device and (3) running a red light.  Thats right, he was supposed to be driving with an interlock breathalyzer aparatus from his LAST DWI conviction.

The three misdemeanors carry possible six-month jail sentences and fines ranging from $200 to $500.

Knievel was cited for felony DUI and was booked into the detention center.

The Honda Accord and Ford Taurus had to be towed from the scene, but the Hummer was able to drive off.

Knievel pleaded guilty to DUI in South Dakota in August 2013. He had been arrested in Lawrence County after the vehicle he was driving crashed into two motorhomes while he was leaving the Buffalo Chip Campground.

He received a suspended jail sentence and paid nearly $600 in fines and his driver’s license was suspended for 30 days.

Knievel called into “TMZ Live” radio talk show after his 2013 arrest and admitted he was drunk that day, saying “I’m a frickin’ drinking, driving daredevil.”

“I ride motorcycles and I friggn’ drink and ride … that’s my deal,” he said.

He said he had an alcohol problem.

If you’ve been accused of  a DWI (Driving While Intoxicated), it is crucial that you act quickly.