Kenneth Desormes of New York  expressed his contempt, or perhaps dismay, at his Breathalyzer test results by attempting to scarf them down.  This creative plan cover-up plan didn’t pan out, however, and the police served him up a steaming hot dish of new charges.

Desormes would have been only charged with misdemeanor DWI, but his attempt to chew up the evidence from the breath test led to an additional charge of obstructing governmental administration, and criminal tampering.  The initial arrest for the DWI was prompted by officer 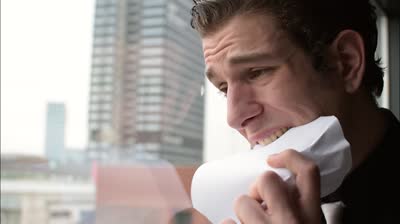 observations.  In Texas, the requisite probable cause determination by officers requires articulable evidence that someone has lost the normal use of his mental or physical faculties due to the introduction of alcohol.  The officers requested that Desmormes take a Breathalyzer test, which indicated he had a 0.13 percent blood alcohol content (BAC).

His motivations are unclear, but one can infer that Desormes was not happy with his test results, and Desormes allegedly tried to snatch the results from the printer and eat them. Impeding a police investigation can get you an obstruction of justice charge, and Desormes, although creative in his appetite to mitigating the incriminating test results, is no exception. The obstruction charge is a Class A Misdemeanor, punishable by up to a year in Jail.

In addition, Desormes was charged with criminal tampering.In New York, a conviction on this charge  may add another three months to his potential sentence.

An Appetite to Get Away with It!

Believe it or not, Desormes he’s not the only one to try to eat incriminating evidence.  As many poeople may be aware (and perhaps personally aquainted with), one way that those suspected of possessing drugs dispose of the contraband is to eat it.  The success rate may not seem too high, but then again, how would we know who were the ones that had got away with it?

A notable recent case that gained national attention was when Florida Crime Stoppers director Richard Masten was placed in contempt of court for refusing to reveal information related to a tipster … by eating a piece of paper in open court in front of the Judge.