Seattle police have released the in-car video of a police officer punching a handcuffed woman after she kicked him. 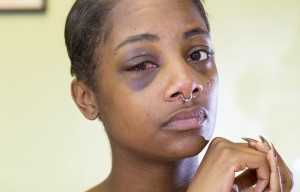 The officer broke an orbital bone in the womans face.  She was handcuffed, she was already subdued, but the officer felt the need to make her pay for kicking him as she was being placed in the back of his patrol car.

The King County Prosecutor announced that the officer will not face criminal charges; he acknowledged the officer’s actions might not meet the Seattle Police Department’s policies, but says that does not mean it was a criminal act.

Officer Adley Shepherd responded to a call about a possible domestic violence incident in South Seattle. The situation escalated. A woman involved in the incident, Miyekko Durden-Bosley, was put in handcuffs and placed in a patrol car.

Bosley kicked Officer Shepherd who responded with a single punch to the woman’s face.

The King County Prosecutor examined the findings and said there was not enough to prove the punch was unreasonable. No criminal charges will be filed against Officer Shepherd.

The Seattle Police Officers Guild is supporting Officer Shepherd who is a 9 year veteran of the department. The union says he should be returned to full duty as soon as possible. Officer Shepherd remains on administrative leave while an internal investigation proceeds.

Excessive force?  Most certainly.  Repercussions?  Sadly no.  I think the key thing that the King County prosecutor ignores is that this woman was handcuffed.  She was already subdued, what possible excuse is there to break the orbital bone in a handcuffed womans face?  This officer is absolute garbage.  Maybe someday karma will catch up to him, but sadly, not this time.

If you are accused of ANY CRIMINAL OFFENSE it is essential that you have an aggressive criminal defense attorney in your corner.  You need someone that will fight for your rights. You need a tenacious lawyer that will put the state to their burden.