During a Police chase in Tijuana, Mexico a man reportedly high on a cocktail of drugs (including, you guessed it…PCP) leapt from a highway bridge.  Not only did he survive, he bounced right up and weaved his way through passing traffic before police finally caught him.

Officers were called after reports of a disturbance – when they arrived at the scene they found 35 year-old Hilario Guajardo stripped off to the waist and itching for a scuffle.

However, when confronted with the prospect of a quarrel with armed police officers, Guajardo  ran 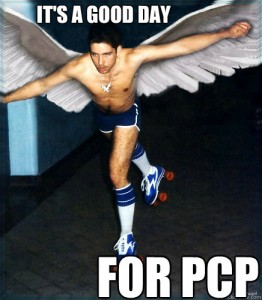 off down a main road before coming face to face with another patrol that had cordoned off the far side of the bridge.

As officers closed in Guajardo jumped the bridge.

Video of his leap was captured by a passing motorist on his dashcam video.

“I saw him crash to the ground and was expecting him to stay lying on the ground but he just got up and walked off with no visible sign of injury.

“Everyone was pretty stunned but it took a while for the police to realize that unless they acted they were going to lose him.”  The motorist reports.

Officers eventually captured Guajardo and posted on their Facebook page: “This incident highlights the sort of danger officers face on a daily basis when dealing with people who have taken a cocktail of drugs.

“It makes them do things that they would never normally dream of, they put their own lives and the lives of others in danger, and also in some cases seem to have almost superhuman abilities to ignore pain.”