Let’s file this one under ludicrous and unbelievable.  Fifty year old Kavin Jarman, an alleged shoplifter who broke his ankle while getting arrested by the NYPD, was awarded $510,000 for his injury.
What makes this story even more incredible is that this is not the first, or even the second time that he has sued and WON a lawsuit against 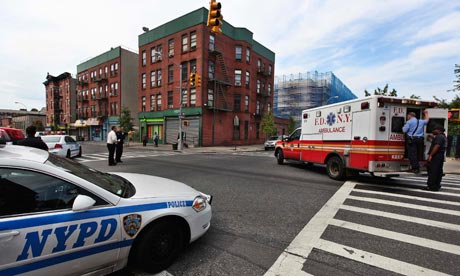 the NYPD.  Two previous court cases were settled before trial for $15,000 and $20,000.
Jarman’s most recent case against the NYPD concerns a broken ankle he suffered while being arrested for shopping lifting in Queens at a super market (He would eventually plead guilty to this offense – but who is counting).

The lawsuits claims are a little comical.  His suit asserts that the 5-foot-5 police sergeant who arrested him was intimidated by the over 6 foot tall Jarman.  However, it goes on to assert that he roughed him up once Jarman was handcuffed.

As someone of short stature myself (that may have been in a scuffle or two back in my younger years), I must say that it may be possible that he roughed him up.  When you are out-sized you tend to over react in physical confrontations.

Jarman says his ankle broke when the officer “effectively tripped” Jarman.  ‘How?’ you might ask? –  by yanking on the handcuffs while standing on Jarman’s foot.

Regardless of what did or did not happen, Jarman spent nine days in the hospital recovering from his injuries.

So…does this mean anybody can sue if the police injure them!?!

Well, not quite…but if you did want to sue the government this is what you would have to do:

2) Wait for the government response.  If they do not respond or deny the claim, then proceed to the next step.

3) Hire a civil rights attorney to pursue a claim.

Arrested For Theft in Texas?

If you’ve been accused of a theft offense, it is crucial that you engage the services of a good defense attorney.

A theft conviction can haunt you for the rest of your life, affecting employment, housing, even your education.

If you are facing a THEFT charge contact attorney Tristan LeGrande by calling 281-684-3500.