Yet another example of a glorified hall-monitor run a muck,  an Oakland High school guard brutally attacked a student, allegedly punching, handcuffing and dumping a handicapped student out of his wheel chair.  The Officer, Marchell Mitchell, has been charged with child abuse and fired.

The details of this situation are deplorable. 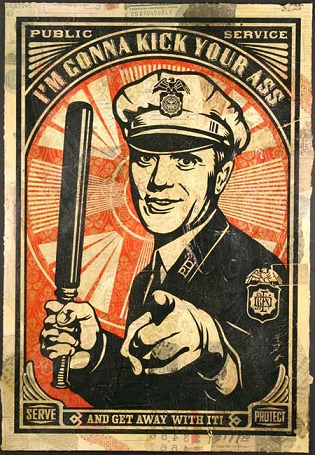 Mitchell was trying to encourage students to get to their classes when the bell rang and they were late.  The victim, a student name Francesco Martinez with Cerebral Palsy that uses a wheelchair, either refused to obey or was too slow for Mitchell’s liking.

So this swell-guy took the handles of Martinez’s wheelchair and pushed him toward class, Martinez objected and tried to slap away the guard’s hands, officials said. Mitchell then handcuffed Martinez and continued to roll him, and the student turned around in his wheelchair and spat in Mitchell’s face, authorities said.

This is a new low.  Not only was this guard abusing a student.  This time the abuse was to a handicapped child.  Not only is this an abuse of power, oppression and degradation  – this time it happened to someone that cannot even defend their self as well as a normal student.

This stuff sickens me, and I am reminded of the many many times I have clients that tell me of the abuses they have suffered by the police or guards.  I thought that was bad enough.  But this is despicable.

Video of the Incident