Caffeine and salacious visual stimulation is not all customers at “Java Juggs,” and “Twin Peaks,” in Everett, Washington were served hot and ready, according to prosecutors.   Carmela Panico, the owner of five drive thru coffee shops with bikini clad barristas plead guilty to prostitution and money laundering.  As part of the deal she also agreed to stop operating the businesses and hand ownership of her coffee stands over to the city of Everett.

The Whip cream on top? Panico also agreed to testify against a former police officer who is alleged to have helped Panico avoid detection in 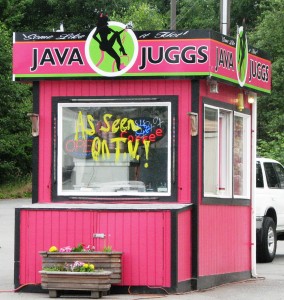 exchange for sexual favors from Panico herself.

The low-down on these grind-houses according to police is that the barristas were engaged in sex shows and prostitution with customers for some extra dough. Baristas who worked at Panico’s stands earned hundreds of thousands of dollars, one barista claims she earned $500,000, according to reports.

The barristas claim Panico knew about, and even encouraged, these special orders, using her own profits from the criminal enterprise to finance her lavish lifestyle and buy more coffee stands, often with cash.

In Washingoton, not only is prostitution illegal, but, it’s also a felony to advance prostitution or to make profit from it, the charge Panico pleaded guilty to in her deal with prosecutors.

In exchange for her cooperation in the upcoming trial of a former police sergeant who is accused of undercutting police investigation into the coffee stands in exchange for sexual favors, prosecutors are recommending that Panico be sentenced to two days in jail in addition to the two days she has already served.