Home » Criminal Justice » Is That A Banana In Your Hand, Or Are You Trying to Kill Me?

Is That A Banana In Your Hand, Or Are You Trying to Kill Me?

Channing allegedly drawing and pointing a banana at officers “in the same manner someone would draw a standard handgun from a concealed holster,” according to an officer at the scene.  Channing claimed he was simply joking, but the cops did not have a sense of humor.

Can piss-poor timing and innapropriate prop usage land a comedian in jail on a Felony? 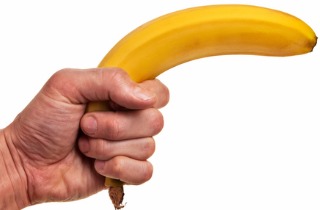 Well…Channing was charged under Colorado’s Felony Menacing statute, punishable by 1 to 3 years in prison.  Under this law, to “menace” someone on the felony level in the Rocky Mountain State, you must:

THe second element is where Law enforcement are hanging their hat on this seemingly trumped up charge.  Sheriff’s deputies who encountered Channing contend that he drew the banana from his coat and pointed it at them like a gun. When Deputy Donald Love began to draw his own handgun, Channing yelled to the deputies “It’s a banana.”

Channing’s story is that the banana stunt was simply a joke material (not to mention, he was a standup comedian). Even if it was not Channing’s intent to cause the deputies to fear for their lives, all that is required in Colorado is that he knowingly put someone in fear for their life where they reasonably could have believed he was exhibiting a weapon.

Is it reasonable to believe that a yellow object pointed at you was a gun?  How many banana guns have you ever seen?

If you are accused of ANY CRIMINAL OFFENSE it is crucial that you have an aggressive criminal defense attorney in your corner.  You need someone that will fight for your rights. You need a tenacious lawyer that will put the state to their burden.