When Possession of Adderall was NOT a Felony in Texas*** 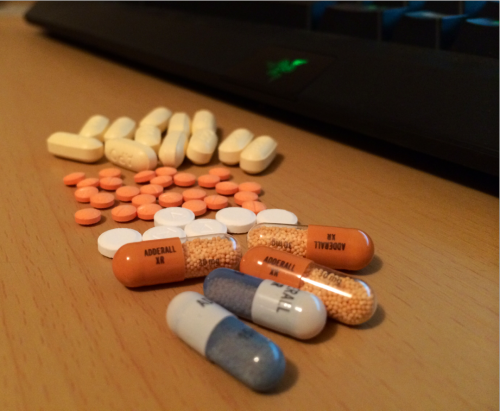 ***AS OF SEPTEMBER 1, 2017, POSSESSION OF ADDERALL/VYVANSE WITHOUT A PRESCRIPTION IS A FELONY – CLICK HERE FOR INFORMATION REGARDING THE RECENT LAW CHANGE ***

Texas has had a unique history in classifying substances people consume to alter their consciousness.

The most recent evolution of Texas Drug Law has come in the form of the Penalty Groups outlined in the Texas Health and Safety Code (HSC).  Beginning in 1989, Section 481 established the “Penalty Group,” with most modern changes going into effect by 1997.  No a single legislative session has passed since its inception without lawmakers making from small to sweeping changes.

This section of the HSC divided most drugs of abuse that people consume into “Penalty Groups,” generally determined by the type of drug they are (stimulant, hallucinogenic, depressant, opiate, etc.), and the degree of perceived danger for the substance. Substances have been added as they have gained more widespread use, or have begun to be used to get people high with more regularity.

Pharmaceutical drugs are also fit into the Penalty Group scheme – enter Adderall (Amphetamine / Dextroamphetamine).  Adderall is one of several Central Nervous System stimulant drugs that originally was developed to treat children with Attention Deficit Hyperactivity Disorder (ADHD).  But ask any college or even law school student what else it can be used for – all-nighters, term-papers, or even legal research.  In short, it is a drug that makes you burn a little brighter a little longer.  I mean, it should, since it is fundamentally indistinguishable in its effect from methamphetamine in its mechanism of action on your nervous system (See Neuroscientist: Meth Is Virtually Identical to Adderall—This Is How I Found Out By: Dr. Carl Hart).  The only main difference is that its typical method of administration, is that it is taken orally.  Such “recreational” or off-label use is rampant on campuses nationwide.

Dr. Carl Hart lecturing about how the rate of metabolism is one of the few differences between meth & Adderall:

Texas lawmakers recognized this fact and scheduled the substance accordingly, Schedule 2, the second most serious classification of controlled substances, right along with MDMA (Ecstacy).  What this meant is that possession of any amount of Adderall, even 1 pill, without a prescription, was a a felony.

How Possession of Adderall became a Misdemeanor – Without Anyone Even Noticing

In the last 5-10 years new designer drugs have come onto the market, and Texas lawmakers have scrambled to respond by adding the new substances to the list of chemicals in the Penalty Groups under the HSC.  However because some of the chemicals listed were so broad, an exception to make sure that people with valid prescriptions for some prescription drugs were not prosecuted.

“If a substance listed in this section is approved by the Federal Drug Administration, the inclusion of that substance in this penalty group does not apply, and notwithstanding any other law, a person may not be convicted for the manufacture or delivery or possession…[under Penalty Group 2]” .

Instead these substances are treated as misselaneous substances and piunished under Section 481.119.  Hence, Possession of Adderall without a prescription became a Misdemeanor – not a Felony, overnight.

Why the Law May Change Back

In short, this was an accident – and reducing the punishment for adderall and Vyvanse was an unintended consequence of the change to the law.  It wasn’t something that anybody caught during the legislative process.  In July the Texas District and County Attorneys Association, as well as the Texas Criminal Defense Lawyers Association sent a notice to members explaining what happened.  Prosecutors all over Texas have begun reviewing cases and are changing charging protocols, and even reviewing past cases because many Defendants were sentenced under the old law.  Legislators are already cooking up a new law that will likely pass during the next legislative session to return illegal possession of the drug to a felony.

Until then, its just a Class B Misdemeanor to Possess Adderall or Vyvanse in the state of Texas.

***AS OF SEPTEMBER 1, 2017, POSSESSION OF ADDERALL/VYVANSE WITHOUT A PRESCRIPTION IS A FELONY – CLICK HERE FOR INFORMATION REGARDING THE RECENT LAW CHANGE ***

If you are accused of any drug crime, including Possession of Adderall (Amphetamine / Dexamphetamine)