Gun Charge For Man Unable to Use Arms

Marcus Hubbard of New Jersey can’t use his arms due to a spinal condition – but that did not stop local prosecutors from filing gun possession charges against him for “constructive” possession of a firearm.
Police allegedly found a stolen handgun in a car that Hubbard and three other men; but when none of them claimed 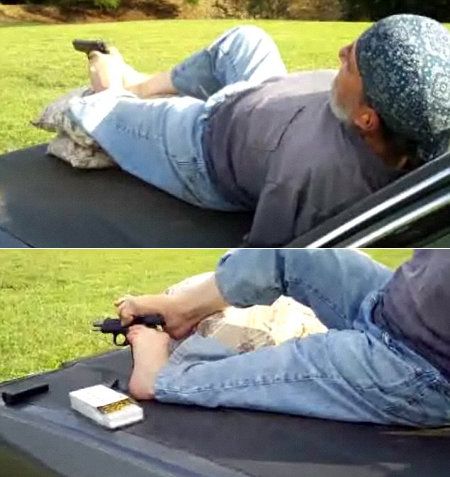 ownership of the firearm, they were all charged with possession.Can someone unable to raise his hands be facing a gun charge?

The right NOT to Bear Arms

Hubbard has been in jail for four months with $100,00 bail – but recently a judge agreed to reduce it to $35,000. Hubbard’s high bail is attributable to prior convictions for drug possession, child endangerment, and obstruction.  The 28-year-old had only been out of jail for six weeks prior to his arrest on this gun charge.
A local prosecutor reportedly said just because he cannot use his hands “doesn’t mean necessarily that he can’t be guilty of a crime.”

Constructive Possession of a Firearm

Basically, this is possession implicit by the facts and circumstances surrounding the incident where the contraband at issue was discovered by police.  Constructive possession describes the ability to legally be in possession of an object without it being under your direct physical control.  For car-related constructive possession, the question usually becomes whether a person knew about the location of an item in the vehicle and had the ability to control it.  In Hubbard’s case, although the three other passengers have denied the gun belonged to Hubbard, he may have instructed one of the passengers to place the gun in the seat-back pocket where it was ultimately found.  Possession of a stolen weapon doesn’t require that prosecutors prove that Hubbard intended to use the weapon, even if he were able to do so.

If you have been arrested for unlawful possession of a firearm or ANY gun crime, call LeGrande Law!
These types of crimes are prosecuted with vigor in Texas, you need an aggressive criminal defense attorney
To fight for your freedom and make sure that justice is done.