Yet another horrible, cold-blooded act of police brutality at the hands of Texas corrections officers – but this time, they killed a man in cold blood.  The city of El Paso released a video showing inmate Daniel Saenz being shot to death while in custody by Officer Jose Flores.

It all started when Saenz was taken to a local hospital after exhibiting strange behavior at a supermarket. At the hospital, he allegedly attacked an off-duty officer and was arrested.

The video speaks for itself.  Yes, you can tell there was a struggle and that Saenz was being beligerant.  But shooting and killing a guy in handcuffs!?  Flores and another unidentified officer were struggling to take the handcuffed Saenz from the El Paso County Jail to a hospital for treatment after repeatedly banging his head against a doorway inside the jail. It ended with Flores pulling out his gun and firing a single 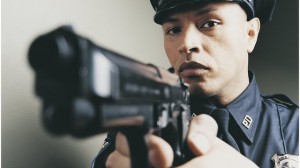 The Combined Law Enforcement Associations of Texas struggled to justify the shooting, only saying that officers had used their tasers on Saenz with little or no effect, as if that somehow justified Flores opting for his firearm.

A grand jury declined to indict Flores in the shootings because of “the totality of the circumstances, which include the long sequence of events that came before the shooting itself.”

More piss poor justification for the shooting was also released – the deceased criminal history, having been previously arrested for aggravated assault with a deadly weapon, family violence and assault of the elderly.

If they keep this up I will have to create a special category for police murders.  Sheesh.  Despicable.